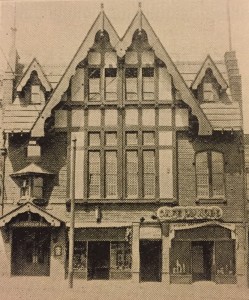 American Hall, ranked by the City as among its top 5% of landmarks.

In addition to describing the distinctive features of the Hall itself, Lammers also

along Market Street from Church to Castro and in the surrounding neighborhoods. This is

the history of the city immediately preceding the Fair —

Built in 1907, the Hall became the center for all of the planning by the San Franciscan

Swedes, fund raising, staffing, and special events throughout 1915 at the Swedish Pavilion in

the Panama-Pacific International Exposition. Sweden was one of the first countries to

commit to the fair and to break ground.

many as among the finest there. It was from the Hall that the Swedes paraded in February

Info: Indoors; accessible by BART & Muni; street parking only. Learn of his masterpiece in